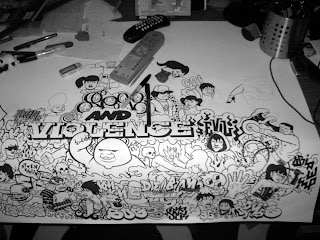 ^above^
realized i didnt show where
i stopped on the last drawing.
after this drawing i may go back and finish this,
but somehow i doubt it.
i didnt like the overall quality,
and thought i could do better.
i think too much time has passed and
cant get back into the groove of this one.
all of the drawing definitely represent
a period of my life and what is going on...
on alot of the drawings i can recall what happened,
and in some ways its a journal/diary.

anyways...
my xbox got da 3 light red ring of death.
i was really bummed out,
but i got more time to concentrate on drawing...
which is what i should be doing anyways.

anyways, i started cleaning up the xbox accesories
which is where i kept my zapped camera and lenses.
i noticed the camera had power. (what?!!!)
my camera had been dead for at least 2 months.
so i turned it on and BAM! it works!!!
i dont have to get a new camera and
now i can put financial focus to the computer.
(high five to god)

i have a new focus for photography,
since i had this downtime without my camera.
i spent the time reading up
on some of my favorite photographers.
(martin parr, stephen shore, joel meyerowitz)
ive some ideas as to what to attack for my next project(s).
time to get buzy over the summer,
and come up with some documentaries and
some thoughts of vancouver life.

Your blog keeps getting better and better! Your older articles are not as good as newer ones you have a lot more creativity and originality now keep it up!