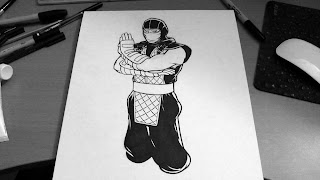 canada day!
i love me some canada,
and it is my first away from it.
one thing i learned out here,
dont take anything for granted.
you dont realize what you miss until you do not have it.

just being in canada meant alot.
alot of people in the states are shitting on obamacare,
and i realize how much canada rocks with healthcare.

i just finished a scorpion image,
need to work on new shit.
more fighting stuff is coming,
maybe back to the big one...who knows.

im also workin on 3-4 video projects....
right now it is in a super raw form.
i need to create intros, edit audio,
and some other cool additions during these videos.
maybe its because im trying to do this all at once,
instead of one at a time....
but my attention deficit disorder is really shining through.
im slowing grinding at all of these projects,
im not really bored with any of them,
so there is a good chance
that these will get finished.

moment of silence to:
radical entertainment
(damn another vancouver development studio in pain)
big huge games
(but now epic games baltimore! some light out there)
day one studios
(shout outs to those guys, another murland studio)

damn,
im hoping things turn around in the industry.
i hope everyone has hope, and is well after the massive shake up.

below:
eazy-e featuring mc ren and dr. dre - ruthless villain
one of my favorite tracks on this album.
i always liked ren,
and wished he had kick ass production all the way through his career.
his first ep was tha shit.
he was
COLD TEARIN' SHIT UP!
damn this beat is BANGIN.
GANGSTA GANGSTA thats what they yellin!
Posted by Sug The Thug at 8:01 PM

Nice one Rob, I really like how solid the left forearm and hand feels, great face too!